Last Friday night I was debating as to whether or not I should treat myself to a Pumpkin Spice Latte on the way home from work.  Then I reminded myself that there was some paperwork that really should get done this weekend.  Also, I really needed to take some specific photos for an upcoming post I am writing.

Plan: Take the ferry into  the city, snap the photos I need, get cozy with my paperwork and a PSL at the Starbucks right next to the Ferry Building, then take an early ferry home.  I was going to sandwich productivity with two slices of fun!  I packed my papers and laptop into my backpack, put some Stephanie Perkins in my earbuds, slapped on a hoodie and my crocs with vintage jeweled shoe clips, and I was on my way.  What could go wrong?

I got off the ferry and noticed that there was a Farmer’s Market.  Cool!  I decided to take a little meander through it.  I was DEFINITELY headed towards Starbucks to do my work, but a little look around for five minutes or so.  I came out on he far end.  Far, as in further from Starbucks than I was when I got off the ferry.  Then, I spotted a new art installation.  Cool!  I might as well take a few minutes and walk that way, I thought to myself.  After checking out the art, I thought to myself “I never walk this direction when I get off the ferry.  Maybe I should explore a little further.”  I walked closer to the Bay Bridge, and further from Starbucks.  I found a bow and arrow so big that even Katniss would be afraid. 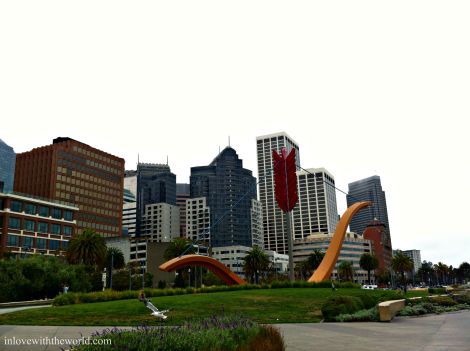 I saw whales on the ground for educational purposes, and starfish/octupai/sanddollars for art/stopping the fun purposes.  Then I saw the Giants Stadium in the distance and decided that I was going to try and find my grandpa’s brick.  My mom and aunt bought him a brick several years ago and I had never seen it in person.  So I went.  Etienne and Anna echoed in my ears.  I found my Grandpa’s brick, and felt glad for this and all the other marks he left on the world.  I took the train back to the Ferry Terminal, found the Starbucks, plunked myself down with a Pumpkin Spice Latte and fully admitted to myself that I definitely wasn’t going to do the paperwork I brought with me, and my laptop was just a somewhat heavy burden at this point.

I was going to hike up to the hill to see Coit Tower.

I went up the Filbert Steps.  These steps are magical- I can only assume that fairies live there.  Perfectly coiffed fairies with shiny wings, sparkly toes, and tidy fairy nests.

The people that live on this hill keep their gardens impeccable- beautiful flowers and lush green leaves fall over the stair railings.

The front doors are beautiful, signs on residential alleys warn tourists in several languages not to walk down that alley, and I spent a lot of time wondering what it would be like to live on this hill.  Where do these people park their cars?  How awesome do their calves look?  Do the neighbors love each other and rally together?  What happens when it rains really hard and the steps get slippery?  Is anyone ever crazy enough to sell one of these houses?  What happens then? 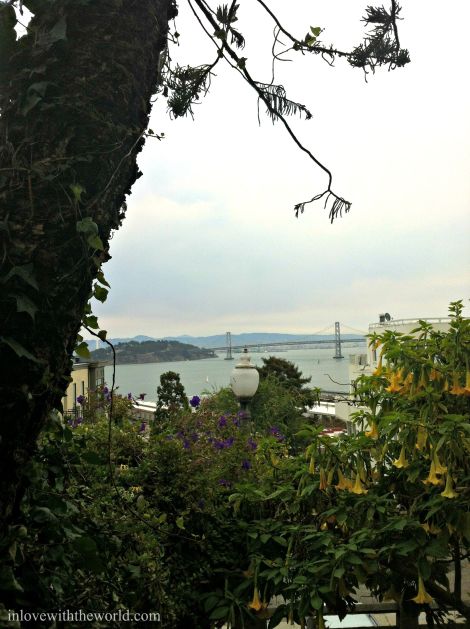 People of Filbert Steps, please write and publish a series of essays/short stories describing life in your unique neighborhood.

By the time I got to the actual Coit Tower I was so in love with the stairs (and so out of breath) that I found myself  remarkably unconcerned with taking pictures of both Coit Tower and the awesome view it provides.  Instead I found myself wandering down a different staircase.

A different staircase!  I had done no research before this local adventure, so I had no idea there was more than one staircase.  Remember, I was going to the city to WORK.

I started down the brick Greenwich Steps.

And I found myself in front of a very spooky looking abandoned building.  It was covered in cobwebs, and it claimed to be a castle!

There were even a few old cars parked in front, for effect.

It turns out that Julius Castle was once a very famous and fancy restaurant.  It has had a series of misfortunes (including a fire) that caused in to close down, likely permanently.

I was brave and walked up the front steps for a closer look (the gate was open).  I couldn’t see much.  I would love to go on a tour of this place, but I don’t think any exist.  The tour should definitely be at night, it should definitely be on Halloween, and the guide should definitely be wearing some sort of vintage restaurant costume.  And they should pretend this place is haunted!  By a old chef, vowing to get revenge on the bartender that married the waiter the chef was in love with!  And the chef fell tragically off Telegraph Hill to his death!  Holding his chef’s knife in one hand and the apron of his love in another!

Or, you know, the tour could just be about the actual history of Julius Castle.  That would work too.

As I continued my decent on Greenwich Steps, Lola and Cricket chatted in my ear. (Stephanie Perkins is one of my favorite YA novelists).

While I found the Filbert Steps enchanting and perfect, I found the Greenwich Steps to be eclectic and arty.  I wanted to move in immediately. 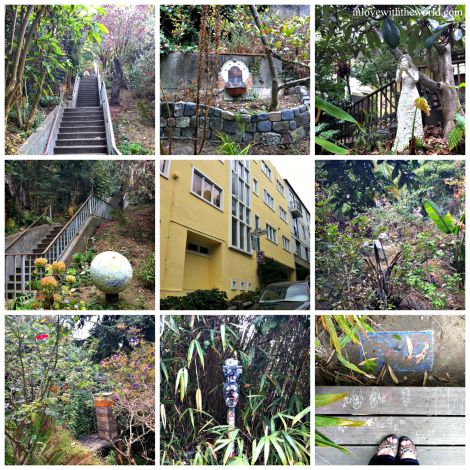 …or maybe she was just looking questioningly after the teenage boys who were discussing the immediate possibility of boarding down this hill.

…and finally, I decided it was probably a good idea to snap a photo of Coit Tower.

Moral of the story: prioritize play.  Wander around in your favorite city without a plan.  Wear shoes that are comfortable and cute.  Have a pumpkin spice latte.  Oh, and bring an audiobook.

Other things that I want to do/see in this area: find the Parrots of Telegraph Hill, go on SF City Guide’s tour of the Coit Tower Murals.